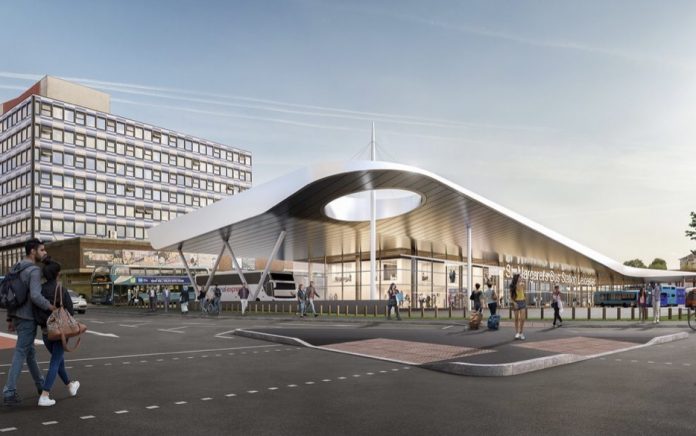 St Margaret’s Bus Station in Leicester will close at the end of this month, as work begins on a major £13.5million redevelopment.

Leicester City Council is planning to rebuild the existing bus station and revamp surrounding streets as part of a major scheme to regenerate this part of the city centre.

The Bus Station will close to the public from 7pm on Thursday 31 December, so work to prepare it for demolition can begin.

National Express coach services will continue to operate from St Margaret’s, with temporary offices and stops in place.

County bus services will also continue to operate from temporary stops located on Gravel Street, close to its junction with Church Gate, Charles Street and Abbey Street. All changes will be clearly signposted. The temporary changes will be in place from Friday 1 January 2021.

The works will require the closure of Gravel Street, between its junctions with Sandacre Street and Abbey Street. Clearly signed diversions will be in place. Access for pedestrians will be unaffected.

The striking new bus station building will be glazed from floor to ceiling and feature a striking curved aluminium roof that appears to float above the main concourse hall.

Bus passengers will benefit from a completely redesigned and improved internal layout with a new café, better seating and real time digital passenger information. There will also be increased capacity for national and regional bus services, with the number of bays increased from 18 to 24.

A series of energy efficiency and renewable energy measures will help make the new bus station a carbon neutral building. It is believed that this would be the first bus station to be built to net zero carbon standards in the UK.

Electric bus charging points will be installed, and the new building will feature secure storage for up to 150 bikes.

Improvements to footpaths and roads immediately surrounding the bus station are also proposed, with better facilities for pedestrians and cyclists.

The £13.5million bus station redevelopment is part of the St Margaret’s Gateway regeneration project. This is supported by a £10.5m allocation from the Getting Building Fund, a pot of government funding for shovel-ready infrastructure projects to create jobs and support economic recovery across the country.

Work on the new station is expected to take around four months, with construction on the new building due to begin by late-spring 2021.