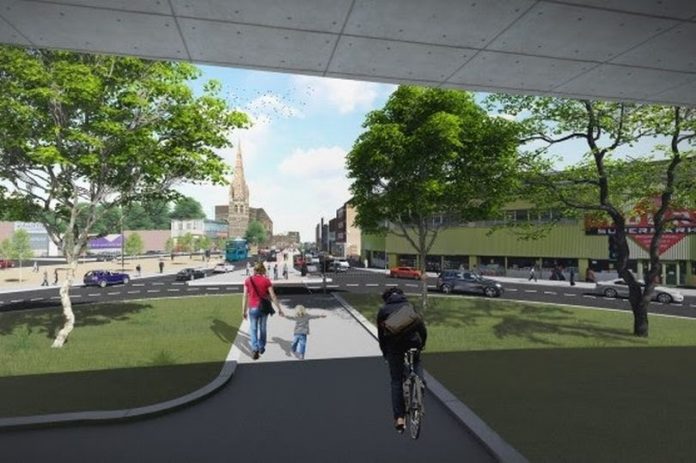 Major resurfacing is due to take place at a busy roundabout in Leicester, as work nears completion on a £2million improvement scheme.

The work – which will see the carriageway around Burleys roundabout and its slip roads completely resurfaced – will take place from Monday 11 January and will involve overnight road closures on weekdays for up to three weeks.

It is a vital part of the ongoing Belgrave Gate improvement scheme which is creating a safer and more attractive route for pedestrians and cyclists between Haymarket Bus Station and Leicester’s Golden Mile, while significantly improving the condition of the road for motorists.

To complete the resurfacing as quickly as possible and to minimise disruption, work will be carried out overnight from 6pm when road closures will be in place. Roads will then be reopened to traffic everyday by 6am. Some bus services will be operating revised routes on the nights affected.

The resurfacing is expected to be completed by Saturday 23 January, but work will be dependent on weather.

This will be followed by signalling improvements in February which will mark the final stage of this ambitious scheme.

So far, a new cycle track and improved footpath has been created along the central reservation between Burleys Way and the new routes for pedestrians and cyclists completed following the removal of the Belgrave flyover.

New artwork has also now been completed on the flyover columns as part of the latest collaboration between Leicester City Council and local street art specialists Graffwerk.

The Lotus Flowers sculptures which previously stood on the roundabout have been repaired and repainted and are now in their new location at the recently created open space on Archdeacon Lane, close to the Charter Street Bridge entrance to Abbey Park.

The overall Belgrave Gate improvements scheme will cost £2million. This latest phase will be mostly funded with Government cash as part of Leicester City Council’s successful bid for £7.8million in the first round of the Transforming Cities Fund.